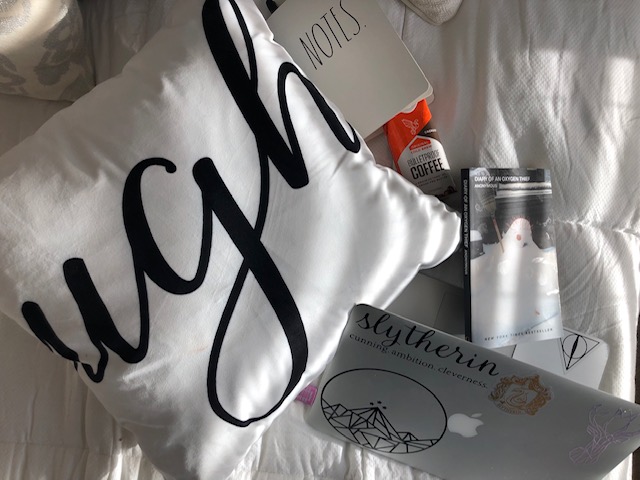 The other night, I woke up around 1:30am. Part of me blamed it on the Bulletproof Coffee I consumed as part of dinner – because that, my friends, is what a truly normal human being does. Good thing I am probably not entirely human. I lack the finesse.

So I woke up and my mind was racing with an idea. An idea for a story…
And for the first time, I had nothing in my easy proximity to write down the idea. For a moment I thought I could just remember it by morning. No reason to worry. But it nagged at me, telling me now! you demon alien weirdo (I don’t call myself that internally…often). Determined to not wake up David, I grabbed my phone and typed it all out.

It gave me five character names, a thin plot and some general piques of interest and though the entire thought out note was maybe a paragraph, it took me an hour just to write that. And for the first time in forever, I was really excited to write something down. It was a confusing feeling because part of me is still really convinced that Bulletproof Coffee (mocha flavored – if you’re curious) had warped my mind. The other part of me is assured this is a story I want to tell.

I have started and stopped plenty of stories. I have folders on folders of things I have started – conversations here and there, character builds and rhythmic nonsensical things that sound pretty but are confusing to the consuming minds. Over and over I have told myself I cannot do, cannot tell, and cannot even complete a clear sentence. It’s true. I hold no degree in English, my command of the language is probably utter garbage but there is something I think about constantly.

Art is art. My art specifically lacks in a little finesse but the finesse it has can be defined as hopeful. Will I be a triumph? Probably not. Am I willing to try? Well…if the 18 years of collected notebooks, napkins, floppy discs, USBs, entire drives on a college laptop, blathering text messages/emails/comments to friends and this blog have anything to say for themselves, I’d imagine they would definitely tell you that the same thing:

Is it the heart or the mind?
One controls while the other commands. One would not survive without the other and so the same, so the same. If it’s a story to tell, I will let it talk itself out. Because a story cannot be told without the mind to tell it, nor can the mind tell the story if the heart just isn’t into it.